From late 1994 to Spring 1995 Tim developed a completely revised Phantom alongside 3 new trick kites: the 'Box of Tricks', 'Reflex' and 'Fusion'. The trend at that time was for more silent kites with deeper sails which made some of the new tricks, such as 'Axels' easier to achieve.

The new Phantom, known initially as the 'Phantom Elite' was radically different from the original Phantom in having curved leading-edges, curved trailing edge to sail , deeper sail and more 'outboard' stand-offs. Along with the 3 new trick kites the new range made use of 'Tradewind Kites' fittings.

I remember seeing Tim flying a late prototype/test model in 'white/green fade/black' Carrington fabric at the 1995 Weymouth Kite Festival along with the 3 new trick kites.

Official launch of the kite followed soon afterwards during May 1995. The kite was initially available in the following options:

A few examples of the kite models:

Production of Phantoms under the 'Fizz' brand ceased in August 1996 and Tim manufactured and marketed the Phantom and the 3 trick kites under the with revised 'Benson Kites' branding including new labels.

At this point there were some changes in specification and some refinements. Notably, Carrington nylon was no longer used for the sails. Mylar reinforcements were added to 'wear stress' areas of the sail such as spine and 'stand-off' areas.

The Phantom range was revised with these being the initial options:

Notable changes through to present date:
Fabric: Changed from Icarex P31 (polyester) to PC31 (polycarbonate) during 1997; Ventex polyester fabric used for a short period around late 2000/2001 due to Icarex supply difficulties;
Sewing: Changed over from 'fell' folded seams to current 'flat' seams around 2000.
Framing: Changed at some stage from 3P to 3PT and 5P to 7PT and finally to 'Nitro'/P-2X.

At this present time there is only one option which is listed simply as 'Phantom'. It has Skyshark 'Nitro' lower spreaders, P-2X leading edge spars and P200 spine.

The 'Fusion'
The Fusion was the largest of the three Benson trick kites released in 1995 and it shares much of it's origins with the Phantom.

Here is a recently made kite:

The 'Phantom Freestyle/Outer Space'
By late 1996 there was a growing trend in competitions for a so called Freestyle type of flying. Tim developed a slightly smaller variant of the Phantom to meet the needs of this flying style. Towards the end of development (1997) it became known as the 'Phantom Freestyle'. The kite was never sold as part of the kite range but just a small number were made for the Benson sponsored kite flyers of the time.

Instead of marketing this kite, Tim wanted to do something different with the graphics, so after a period of further 'tweaking' and test kites the 'Outer Space' emerged in mid-May 1998. Later that year the Outer Space was awarded the 'Kite of the Year' award from Kite Passion magazine.

This photograph shows my custom 'Outer Space' (without 'b' in the centre panel) along with my 'very' custom kite a 'Freestyle' replica which was derived from a modified Outer Space template:

The 'Mini Phantom'
The 'Mini-Phantom' was never sold as a completed kite. Although it was derived from the Phantom UL it was not exactly a scaled down version, but it's size was approximately 60%.

Tim Benson produced this little kite in limited numbers only in kit form for a kite workshop given at Fort Warden, Washington State, in March 1998.

Recently I managed to obtain two of the original 1998 kits from the USA. One was built up recently and the second remains as a kit.

The kits contained all the 7 panels of Icarex PC31 precut to which adhesive sail tape was applied. The 4mm pultruded frame was precut and supplied with all the necessary fittings and bridles. LE tapes and Dacron reinforcements were also pre-cut and the small items supplied in plastic wallet with instruction sheet for sewing and framing:

The 'Mini Phantom' is shown in the following photograph along with a current Phantom and my 'Outer Space'-derived 'Freestyle Replica' for size comparison.

Well there we are. I hope I haven't bored too many people with all this Phantom stuff. I'll save all the rest of the detail for my 'Phantom' web site which I hope to get 'live' soon. Otherwise if anyone needs any specific Phantom information please email me.

Thanks Eddie. I've got a matching 'BOT' and 'Reflex'. I'll post a photo. sometime, but not in this Phantom thread.

A seriously well-done series of threads here. I think you deserve a big round of applause.

Thanks for these!
obi

Interesting glimpse into times before I got to know of sport kites.
Never got to see a Phantom fly as the bloke who spoke to me at the beach (summer 07?) thought it would not be a good idea to get his old classic out in the prevailing winds .IIRC that was the day I measured a 40mph gust.
Top

Very cool, you must have quite some collection of Benson kites

Was just thinking the same thing. Thanks for putting this all together Bill, a really interesting read...

BTW, any chance of a group photo of all the Phantoms you own, or are we into not having long enough in one day to set them all up and pack them away again???
Top

A really excellent read, I'm looking forward to the web site, just leaves the question of who's next?
Top

Peter wrote:
A really excellent read, I'm looking forward to the web site, just leaves the question of who's next?

Yes, it's taken me about 3 years to put most of this together and do the research, although I did remember a little bit from back in the 1990's.

It would be really nice to have a bit more written on kite history. It's clear to me that even the real newcomers to trick flying are interested to hear where it all came from.

I guess a kite thread tracking the history of radical / trick kites with photographs would be an interesting read. My knowledge of all that is limited to a rather narrow range of kites. I guess it would need someone with a broad knowledge going way back, for example Mike E.

Fantastic write up Bill. The information is outstanding. I am a huge Benson fan and have built up a small collection of some of the more recent kites. But it sure is nice to see the history in such a wonderful sport. Thanks again,

Thanks for all the great info and photos. A real labor of love.

I'll have to get my old dead Phantom Sport out and piece together a frame.

One of the nicest PEUL (IMHO) : 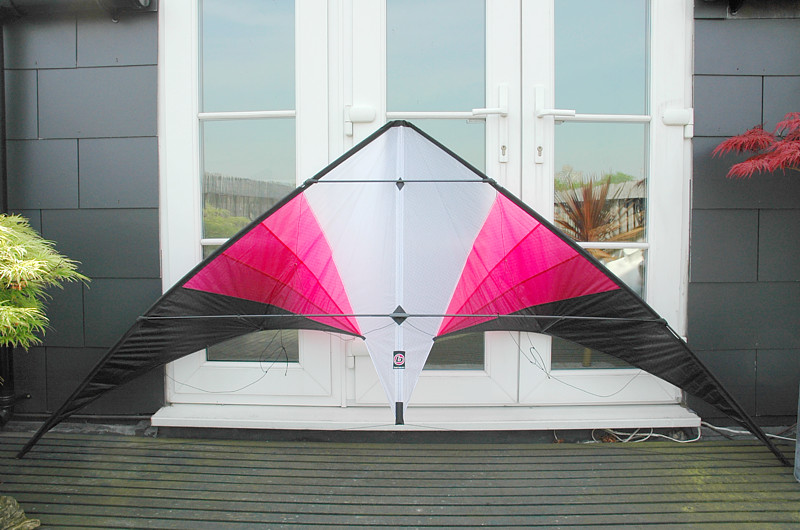 Bill - Thank you so much for your Phantom threads. This is the best yet! A truly fascinating read - THANK YOU

I still love the look of the vented Phantom - it looks awesome! Does Tim still make them?
Top

Steve
Top
Post Reply
Who is online In total there are 2 users online :: 0 registered, 0 hidden and 2 guests
Users browsing this forum: No registered users and 2 guests based on users active over the past 5 minutes