Really gutted that the weather got in the way of a number of us travelling down to Crantock last weekend.

I gather that Sunday turned out to a really good day, so all those that made the effort were duly rewarded.

Suggested date is the weekend of 1/2 September. No idea how this fits in with the tides, holiday season at Crantock, etc, but it's about as late in the year as I am willing to consider camping.

Who's up for it?
Top

Isn't that the last weekend before the schools go back? If so it's likely to be very busy.
Must fly
Roy
REEDDESIGN Web Design
Top 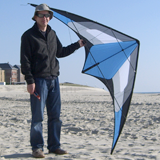 Tide info for that weekend (number after time is tide height in metres):

RoyReed wrote:
Isn't that the last weekend before the schools go back? If so it's likely to be very busy.

Had a horrible though that might be the case.

Dieppe runs from the 8th-16th). Not sure whether that would impact many (or indeed any) potential Crantock attendees.

Can't do the 15th / 16th anyway for various reasons and my desire to camp any later than that rapidly dissipates! The 8th/9th is a possibility though.

Would this be a better date to go for (even if the tides aren't as good)?
Top

Would be good to try and make this happen as no Bristol this year...

Tide info for weekend of 8th & 9th September (number after time is tide height in metres):

With those tides there will be flying space even at high tide,
"You don't need a weather man
To know which way the wind blows." - Bob Dylan.
Top

Bugger, wont be making either date, 8/9 is Dieppe and 1/2 is possible date for rescheduled STACK final round.
Keith
STACK UK
National Director 2006-2012

Ok. Only a week off and the long range forecast (which should never be believed

Just realised, I have another commitment on the Saturday, so I'm going to have to count myself out. Bummer.

I can't make 1st/2nd but I will be in Cornwall from the 8th to the 15th if any of the locals fancy a meet up.
Driving a VW Camper, flying Bensons! (OS, Gemini, DS)
Top

I will be up for a meet. Im going to be in the newquay/ crantock area for a few days from the 7th.
Top
Post Reply
Who is online In total there are 2 users online :: 0 registered, 0 hidden and 2 guests
Users browsing this forum: No registered users and 2 guests based on users active over the past 5 minutes
×