Very Rev-shaped.
I suppose you'll all say it's a Chinese rip-off and will fly like a brick doesn't.
But it's SOO pretty, and the spec is fairly good, and it's relatively affordable!

Are we all just bowing to the Rev patents/copyrights here?
[I suppose the fact that this forum is provided by a kite shop, and the said kite shop has to maintain happy relationships with its suppliers, will have some bearing on the matter!]

Or is anyone at liberty to say that the Emperor didn't get his New Clothes from Gok Wan?

If I actually bought it, and flew it, would I be allowed to post a review here?

I for one would be interested if you did

Quite a few chinese kites look identical to more pricey EU and US models (not that you can tell from one photo) and plenty of modern mass produced kit is made in china - how bad can it be . . . ?

not sure how this one comes to be in Leeds though
Favourite dual Dynamic bridle Phantom Elite. Favourite Quad Sedgwick 1. Favourite Singles Rokkakus
Top

I did a bit of research.
This particular kite appears to be from the Wei Fang Albatross Kite Company, China, their item NO:QU24008.
The fabric is said to be Nylon Mylar (Ripstop Nylon). The lines they supply are Dyneema, 50 daN (about 110lb).
The spars are all 8mm carbon.
All of which is OK, but not exactly superb.
So I'm not planning to pay £80 inc p&p. for one.
But it IS very, VERY pretty ...
Brian. (Past it, but reaching back!)
Silver Fox 2.5; HQ Shadow SUL; Rev 1.5 SLE; Spiderkites URO; Etc...
Top

I just had to sign up to this forum to talk a little about these rev shaped jobbies from china cus I read alot of stuff that just aint true. Me I own 3 and a couple of revs, a 1.5 and an older EXP. I also fly with a few mates who also have them. We've given our shilling to the REV empire and I think we're allowed to try something else.

Are they copies of 'Revolution Kites' ? Well they're not selling them as rev's and nor are the designs the same but they share an almost identical basic shape. You decide.

Dimensions differ slightly by half an inch on the LE but you could swap frames about from a 1.5, Infact I have. The chinese frames are better *shock horror* because they're more consistant in weight (about 16g each with a 3 wrap construction) and I haven't broken one yet despite flying in some horrific northern england winds lately. End caps are not quite as strong as Rev originals but construction, matierial, bridle, lines and handles are all excellent, if not email him (4mkites on ebay) and he will sort it out for you. You can also order one on monday and have it in your house by friday from china he's so fast and he also pays the import tax.

Anyone who tells you the brand I have fly like rubbish, are made of bamboo and shoelace then fall apart in a day is a liar im afraid. They fly as good as 'Revolution Kites' and for £80 are well worth a punt. Just read the specs and sizes carefully and dont get the 2/3rd sized one. Try to get one of the 2011 models as they're improving them all the time.

The funny thing is I've been to alot of festivals this year in the UK and see more and more Albatross Quads and even some teams flying them. People I think are a little scared to get them out sometimes because they're afraid of the Rev Taliban giving it the big ooh aaarr but just do your thing and get em out. You wont get locked up for it and as far as I know we can all make up our own minds about morals and feeding the 'Communist dragon empire'.

The dude who got banned from the Rev forums some time ago for reviewing one of these and saying it was as good as a Rev was correct. They are, just make sure its a genuine 'Albatross' and not a copy 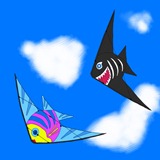 Thanks for all that, Jason. Welcome to the Forum!
I think it was mainly subscribers to The Other Kite Forum (TM) that tended to rubbish any quad line kite that didn't come from the official Revolution factory. Here, the expressed opinions on Chinese kites have tended to be gentler, although I've had the odd warning not to waste my money.
I for one appreciate your input. I'll admit I'm tempted by the kite on eBay, but so far I can't persuade myself to buy it at the price he wants.
Maybe I should approach the factory and ask what their minimum export order is? I could then get one for myself, and sell off the rest at a price that would cover my outlay. Oh, OK, just dreaming ...
Brian. (Past it, but reaching back!)
Silver Fox 2.5; HQ Shadow SUL; Rev 1.5 SLE; Spiderkites URO; Etc...
Top

Thanks for the welcome

Buying from the official unoffical Albatross supplier from ebay (4mkites) is I recon the safest way to buy one even though its from china. I say this because he's sold absolutely shed fulls to the uk (check his feedback) and has great CS although he's a bit rusty on his Engrish.

His would cost you £81 i think with free delivery but you would probably get it faster than from the UK guy. He also sells x2 cheaper than 1 but not by much. He will do custom sales for you, vented versions of kites, spar packs, lines etc etc. You could also go straight to Albatross kites via alibaba/aliexpress for bulk but I'd talk to Bing at 4mkites first because he I suspect is an unoffical supplier for Albatross because like i said he can get you versions not advertised anywhere.

I'm starting to sound like his personal sales guru but I'm just another brit flyer who likes a bargain. I really didnt think they'd be anywhere near Revs but was pleasantly surprised. Everytime I take it somewhere someone asks about it, wants to have a go and next time I see them they have one lol.
I think the only thing missing is the initial setup from Revolution which is very good out of the bag. The china quads can vary from one to the next with things like how tight the sheet is etc. Its just a case of setting them up how you want it.
Also models vary, if you look at the main ebay seller you'll see a black/red/grey on white one in a tribal pattern, this one flys a little more deliberately and rev like than the black/pink on blue design which seems faster and quicker to turn but not quite as accurate as the tribal style. Not sure why this is because they all use the same frames, i guess its to do with how they're set up bridle wise. They all weigh 210g iirc.

I just noticed he has a completely white one <170661983245> which might make an interesting spray project..hmmmm hehe

These tribal quads don't come with the added colours,they have been modified.I use them as much as I can,they fly great
Last edited by daz larsen on Wed Jul 13, 2011 12:38 pm, edited 1 time in total.
Top

I like the tribal pattern ones like Daz's more than any of the other Albatross models. They all fly well but I like that the best for slower flying.
I do like the custom venting in those Daz, do they fly better than the actual vented model of that kite?
Top

Have not had a lot of time on a vented,mine are more a mid vent and I fly them as much as possible
Top

a REV is a REV
a copy is a copy
the ones i have seen ( similar to above ) were crap, unless you have flown a real one and can adjust bridle etc to make it fly they would put off a first time quad flier and therefore damage the image of kites/kitefliers.

I may be wrong, but ...
I don't think many people would actually buy a (new) quad line kite as their first kite.
I reckon most people who actually get round to buying a (new) quad line kite will have got to that point by flying other kites. Dual ones, probably. Or possibly after borrowing a friend's quad. So they (or their friend) would already have some basic idea of what a bridle does (or would have the nous to find out). No real problem there then.
I've seen almost-new Revs advertised for sale on ebay by people saying they couldn't make them fly. So where's the advantage (to a newbie) of spending £200 on a quad instead of £80?

Does it all boil down to the ethics of buying something that incorporates (or improves on) design features borrowed from an older model? Features which (apparently) no longer have patent/copyright protection?
I bet my Flying Fox delta incorporates (or is based on) some ideas that Peter Powell first put forward. Should I care?
Brian. (Past it, but reaching back!)
Silver Fox 2.5; HQ Shadow SUL; Rev 1.5 SLE; Spiderkites URO; Etc...
Top

Fungus wrote:
a REV is a REV
a copy is a copy
the ones i have seen ( similar to above ) were crap, unless you have flown a real one and can adjust bridle etc to make it fly they would put off a first time quad flier and therefore damage the image of kites/kitefliers.

If your at Dunstable next weekend 16/17 July,you can try one of the tribal quads then decide.Have had to make no adjustments,flys great.I do not think this is a copy

This is a copy

Last edited by daz larsen on Wed Jul 13, 2011 12:39 pm, edited 1 time in total.
Top
Post Reply
Who is online In total there are 2 users online :: 0 registered, 0 hidden and 2 guests
Users browsing this forum: No registered users and 2 guests based on users active over the past 5 minutes